The Future of Banking, interview with Chris Buijink

Mark Sanders (FIRES Coordinator) interviewed Chris Buijink, the President of the Dutch Bankers Association, at a Utrecht School of Economics event focused on “The Future of Banking“. At this stakeholder engagement session, Mr. Buijink answered questions about the current state of the European financial system, touching upon the European Banking Union and the post-crisis evaluation.

Mr. Buijink has held various positions at the Ministry of Economic Affairs throughout his career, to later become President of the Association of Banks in the Netherlands. When asked about whether the regulation put in place after the 2008-2011 events would be safe enough to prevent another crisis, he answered: “the necessary measures that had to be taken have been taken. It’s a safe building, but it can still collapse.” Mr. Buijink agreed that most of the measures implemented were justified and necessary to make banking safe. There have also been initiatives and developments in raising the ethical bars and professional moral in the banking system and Mr. Buijink explained how the societal statute, code of conduct and bankers’ oath all help to inspire a higher moral standard for bankers.

The interview then took an interesting turn as the conversation stirred into innovation and entrepreneurship. Questions about the future relevance of banks as well as their efforts to stay competitive and innovative formed much of the conversation. Mr Buijink’s belief, when asked whether the bank of today will exist in 30 years, was that “if banks don’t succeed in staying relevant for the customers, they will disappear. But a number of banks will still be there with a relentless curiosity of what satisfies people’s needs. The banks that want to survive should be radical in their need to innovate”. Banks are challenged both on traditional basic payment services as well as the more complex financing products by fintech startups and alternative finance. And new competitors are often not “banks” and therefore need not adhere to the same strict rules. On this issue, mr. Buijink was confident that banks would find a way to balance the importance of securing stability, keeping up ethical standards and being aggressively innovative. According to mr. Buijink the banks will have to shape their own future. And it should be safe, ethical and innovative. 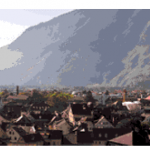