The GEI approach of measuring entrepreneurship was developed by Zoltan Acs and Laszlo Szerb. GEI is a composite index (GEI Index) aiming to measure productive entrepreneurship in a multidimensional way. The basic idea of the GEI Index is based on the theory of National System of Entrepreneurship (NSE). It was introduced in the paper of Acs and his colleagues in 2014. NSE is defined as a dynamic, institutionally embedded interaction between entrepreneurial attitudes, ability, and aspirations, by individuals, which drives the allocation of resources through the creation and operation of new ventures. There are some key elements in the GEI index building methodology. One of them is the construction of the pillars that involves both the individual and the institutional aspects of entrepreneurial performance. The other key element is the application of “penalty for bottleneck” method in the calculation of the index. Its application makes possible to identify the bottleneck pillars in the system, and it helps us to suggest policy recommendations by allocating additional resources for improving the entrepreneurial system in an optimal way. Therefore GEI index can be applied in a complex way: It measures the national entrepreneurial performance, identifies the bottlenecks of the system and makes possible to allocate the resources in an optimal way.

Besides identifying the element of the national entrepreneurial systems, our research group believes that differences in entrepreneurial performance are shaped and influenced by regional characteristics. For measuring these differences, the Regional Entrepreneurship and Development Index (REDI Index) was developed by several members of our research group in 2013 and 2014. The basic idea of the theoretical background of REDI is the same as the GEI (the national system of entrepreneurship). But this theoretical framework has been extended by such key indicators that play special role at regional level (like accessibility, agglomeration effects or regional specialization). The methodology of REDI Index also includes those key elements that can be found in the GEI Index. Therefore it measures both individual perceptions and the institutional background by using regional level indicators. The “penalty for bottleneck” method is also applied in the calculation of the index; hence policy recommendations may be provided for the optimal resource allocation of the European regions.

In order to illustrate, how the REDI Index measures the entrepreneurial performance of European regions, two comparisons can be seen here. The first describes the pillar scores of the best performing European regions: London, the metropolitan region of Paris (Ile de France) and the region of Copenhagen (Hovedstaden) (Figure 1). 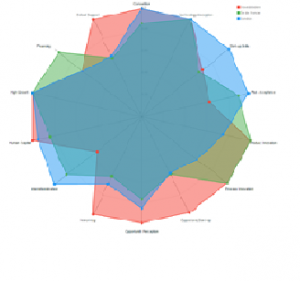 Figure 2: The entrepreneurial performance of the regions of Stockholm, Madrid and Budapest 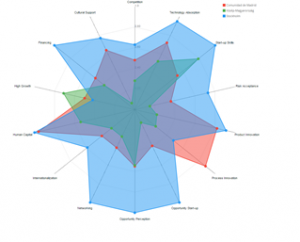 In the next period we are focusing on the improvement and on the extension of the GEI and REDI Index to be able to provide a more accurate picture about the institutional components of the entrepreneurial ecosystem. In particular, we are interested in incorporating the financial, the knowledge and the labour institutions.