First Policy Round Table in Piraeus, Greece was a success

On January 19th the FIRES-partners at the university of Piraeus, Greece, hosted the first in a series of 10 policy round tables in which FIRES-researchers engage with policy makers around Europe to discuss the reform proposals the FIRES-consortium has formulated. In this round table the participants discussed proposals to reform the intellectual property rights system, the role of universities and various aspects of R&D policy with a small but expert panel of top level policy makers in Greece. The round table, planned for 2 hours, lasted well over 3 hours as the participants took their time to carefully comment on the proposals and underlying analyses. 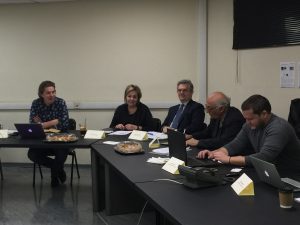 The panel also appreciated the FIRES-consortium making fundamental reform proposals that challenge the status quo that is too often taken for granted. That, of course, did not imply the panelists agreed with the more radical proposals discussed, but the discussion helped them and us think through important aspects of knowledge institutions in Europe. A full report and summary of the discussion can be found here.

D2.1 published as an article in Swedish in the Journal of the Association of Swedish Economists (Ekonomisk Debatt):News
Second Policy Round Table on Industrial Diversification, Entrepreneurship and Regional GrowthEvents, News, Recent